King of the Rats

Ratheky’s painting was discovered at a garage sale by a math teacher who was looking for Douglass Hofstadter’s Pulitzer Prize-winning book, Gödel, Escher, Bach: A Mental Space Odyssey. He was on the hunt for a signed first edition but instead came across Ratheky’s painting. The full-length portrait was one of many interesting paintings for sale but he found the portrait hilarious and paid $120 for it. Few hours later he got into a ridiculous fight with his wife that was audible even by the neighbors two houses down. The woman was so upset about the painting that she threatened her husband with divorce if he would try to hang that “thing” anywhere in the house. She felt disgusted by the depicted animals and the rats gave her chills. A dog’s balls hanging in her living room would surely entertain her husband’s friends, but the shameless ball licking act the dog was putting on would surely cause her to lose her reputation as the leader of the Baking for Change Association. The frustrated husband tried to save the painting for saturday’s Uno night by hiding it in the basement but eventually his wife made him capitulate. In the end, he decided to leave the house to sell that “thing” at the nearest Base Coin Antique Shop. When he got to the shop, the shop owner tried everything to bargain but the man was firm on asking $200.

There comes a time in every man’s life when he has to give in no matter what. This defining moment came for the shop owner on a rainy wednesday afternoon, when a furious math teacher rumbled into his antique shop and insisted on getting $200 for an odd painting that he did not want to buy.

That wednesday afternoon the math teacher made the trade of his lifetime and went out to lavishly celebrate at the local Swapy’s Icecream Shop, alone. Meanwhile, the shop owner googled the signed name on the painting, but couldn't find any information about the artist on the internet. He thought he misread the signature and went back to check the painting again but the name he read was right and the artist, as it turned out, was unknown. The shop owner’s excitement slowly turned into deep remorse. He started to feel disappointed by the deal, so he called one of his employees and asked her to hide the painting in the antique shop's less popular room. An old lady showed up to take the painting to a small room in the back of the shop. She became curious, because she knew that very few items were selected by her employer to become part of the worst collection that the small room represented. In less than an hour that painting earned the right to get into Bob’s Eternal Holdings. The room’s nickname came from the employees who made bets on predicting what the collection’s next item will be.

The old lady gave herself time to examine the portrait. She took out her thick glasses and started to search for the focal point but as soon as she found it, her wrinkled cheeks blushed out of embarrassment. Seeing a dog diligently licking his balls and a cat showcasing his butthole was enough for her to put the painting facedown on an old wooden bidet and avoid the room for the rest of the month.

A few months later an art collector stepped into the island of antique treasuries. He accompanied his wife to a three day obstetrics and gynecology conference but he did not enjoy the first day and wanted to spend the rest of the conference far away from the event hall. As he wandered around the city, he saw the antique shop’s rusty sign and thought that it is far better to be surrounded by antique junk, than looking at a vagina on a twenty foot screen. The art collector spent almost two hours browsing the rooms touching and turning everything around, when he finally found the painting. He was so excited about the discovery that he went to the sales counter to ask for the price. The surprised shop owner avoided the question with experience and quickly rerouted the conversation to find out the man’s excitement for the painting. The art collector instantly realized that his excitement betrayed him and started to bargain for a discount. He told the shop owner that he couldn’t afford $800 for a wooden frame and started to push him for a deal. He came up with the story that his wife was looking for a frame like that for years and she would kill him if he left without buying it. The truth was that he forgot his wallet in his car that was parked a few blocks away and didn't want to risk losing the painting.

The greedy shop owner had a smell for desperate buyers and tried to take advantage of the well dressed man by asking for a higher price. He knew that the man came up with a story to convince him to sell the painting. Unfortunately, the shop owner couldn’t pull out from the sale because there were customers all over the shop listening to their conversation. In the end, the art collector left his wedding ring as collateral and exactly thirty minutes and eleven seconds later he went back to pay $1000 for the painting. The shop owner felt devastated. He imposed $200 extra for the painting at the last minute but even that price hike couldn't scare away the determined buyer from the purchase. The shop owner couldn’t handle the lost opportunity to earn more. That night he got so drunk that he fell asleep on an unknown couch, surprising his neighbour the next morning.

There comes a time in every man’s life when he has to give in a second time no matter what. This defining moment came for the shop owner on a sunny saturday afternoon, when an excited art collector stormed into his antique shop and paid $1000 for an odd painting that he didn't want to sell.

The same evening, the art collector spent so much time researching the internet for the unknown painter, that he almost forgot to pick up his wife from the conference. As they drove back to the hotel, he couldn't hear his wife’s deep dive into the mysteries of the vaginal microbiome. He was thinking of the unwrapped painting that he left on the hotel room’s desk. The man in the painting reminded him of Blondie, the famous movie character from The Good, the Bad and the Ugly directed by the italian director, Sergio Leone. He knew that whoever the painter was, they were not trying to depict Clint Eastwood, because Eastwood’s character didn't wear black sunglasses and didn’t have a beard in the movie. He was so sure that the resemblance was not a coincidence that he bought the epic spaghetti western online and rewatched it with his wife that night.

Two hours and forty four minutes into the movie the art collector already knew that the painter's intention was to depict a confident hero, a winner of a showdown. He knew that the painting’s showdown wasn’t fought with guns and wasn't fought for gold coins either. In the painting there was no battlefield in sight and no trace of war could be found. Behind the green fields the futuristic city and the flying objects suggested technological advancement and peace. Even the warrior’s naginata looking weapon can’t be taken too seriously because of the toy gun that can be seen on the stone floor. As he was staring at the movie’s ending credits, he lost himself for a moment in his thoughts, but his wife’s snoring brought him back from the painting’s world to the hotel room’s king sized bed. He quietly got up wearing nothing but pink boxer shorts, took the painting from the desk and sat down on the sofa. He loved the playfulness of the portrait and the adorably depicted animals. The apples on the levitating executive desk reminded him of the classical still-life paintings. He understood that the horse adds another layer of meaning to the painting but was not sure if that was the painter’s intention or just another coincidence in his mind. He tended to believe that artistic inspiration was contrasted with innocent instincts. An apple can be a source of inspiration for an artist, but for a horse it’s just a fruit to be eaten.

The art collector couldn’t figure out all the hidden symbols of the painting, but he knew that the thirty dots on the warrior’s chest and the ring with the bullhead engraving had to have deeper meanings. By further examining the painting, he noticed a rat in the center that was eating a piece of octahedron shaped cheese.

"Eating can mean prosperity and destruction at the same time," he was reasoning, "but what could the octahedron shaped cheese represent?" 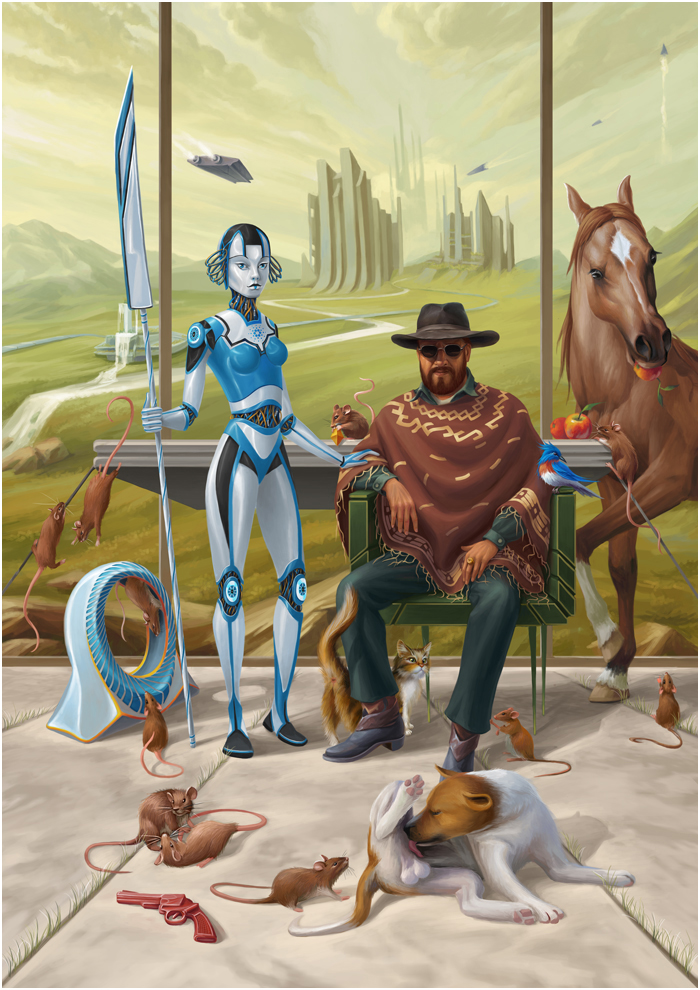